Lipoteichoic acid (LTA) regulates the immune system, including inflammatory responses, through TLR2-mediated signaling pathways. LTA isolated from Staphylococcus aureus (aLTA) has been shown to induce apoptosis, but the detailed mechanism has not been identified. We found that aLTA induced apoptosis through an autocrine mechanism in the human monocyte-like cell line, THP-1. We observed that the expression level of the anti-apoptosis protein, Bcl2, was suppressed in LTA-treated THP-1 cells. In addition, the cytokines, TNF-α and IFN-γ, which have been shown to induce apoptosis in some cell lines, were involved in THP-1 cell death via the modulation of Bcl2. The suppression of Bcl2 by aLTA was recovered when the negative regulator, SOCS-1, was knocked down. Taken together, these results showed that aLTA induced apoptosis in THP-1 cells through an autocrine mechanism of cytokines and SOCS-1-mediated Bcl2 inhibition. 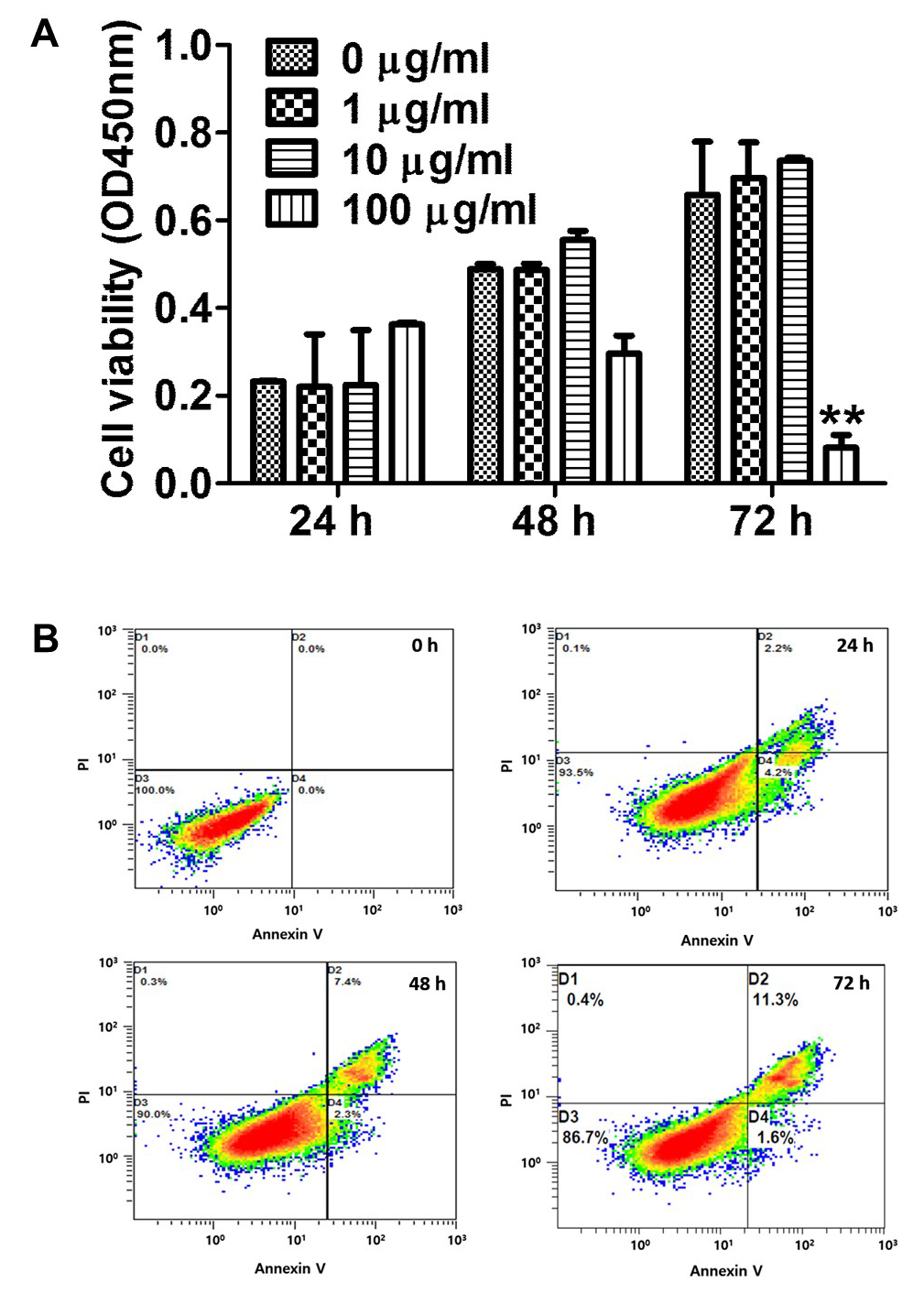 Apoptosis, or programmed cell death, is an important immune system function triggered by various signals [1]. Many studies have shown that cellular apoptosis is regulated by the Bcl2 protein family and caspase family [2]. Two members of the Bcl2 family play roles in apoptosis. Bcl2 protein is involved in suppression of apoptosis, while Bax promotes apoptosis. Caspases are a family of cysteine protease enzymes that play an important role in programmed cell death including apoptosis, pyroptosis, and necroptosis. Increased caspase 3 activity is considered a central executioner of the caspase family [3].

aLTA, one of the cell wall components of , is considered a virulence factor that affects infection and immunity to the host of [7]. Generally, LTA is composed of phosphate chains and glycolipids and interacts with toll-like receptor (TLR) 2, CD36, and a TLR-independent system. However, the immunomodulatory ability of LTA depends on the species of Gram-positive bacteria [8, 9]. For example, aLTA significantly increases the production of inflammatory cytokines and causes lung inflammation and circulation disorders.

Cells were incubated with 10 μl/well cell proliferation reagent WST-1 for 30 min. Then, absorbance of samples at 450 nm was measured by a microplate reader against a background of blank control.

Caspase-3 activity assay was performed with a Caspase-3 Assay Kit (Abcam, USA) according to the manufacturer’s instructions. Briefly, cells were resuspended in chilled Cell Lysis Buffer and incubated on ice for 10 min. Cytosolic extract was transferred to a fresh tube and subjected to the assay. Then, 50 μl of 2X reaction buffer and 5 μl of the 4 mM DEVD-p-Na substrate were added to each sample and incubated at 37℃ for 60 min. Colorimetric change was determined on a microplate reader (OD 400-405 nm).

THP-1 apoptosis was examined by flow cytometry using the Annexin V-FITC/propidium iodide apoptosis assay (Abcam) according to the manufacturer’s instructions. Briefly, washed cells were resuspended in 100 μl of Annexin V-PI staining solution and incubated in the dark at room temperature for 10 min. Cells were centrifuged at 400 ×g for 5 min, and supernatant was discarded. After adding 200 μl of PBS, cells were examined immediately by flow cytometry.

Statistical analysis of the experimental data was performed using two-tailed Student’s test, and significant differences of the means between groups were assessed by one-way ANOVA, two-way ANOVA or unpaired twotailed test. The data shown are representative results of the mean ± standard deviation (SD) of triplicate experiments. Differences were considered statistically significant when the value was < 0.05.

Figure 1.LTA induced THP-1 apoptosis. (A) THP-1 cells were treated with indicated doses of LTA for indicated times. Cell viability was examined by WST-1 assay. Data are displayed as mean ± SD of three independent experiments. Statistical analysis was conducted with one-way ANOVA and Tukey’s statistical test. ** < 0.01 compared to 0 h. (B) LTA-treated cells were stained with anti-Annexin V and anti-PI antibodies, and apoptotic cells were analyzed by FACS analysis. Analysis were performed independently in triplicate and representative figure was shown. Statistical analysis was conducted with two-way ANOVA test.

Figure 2.Caspase 3 was involved in LTA-mediated THP-1 apoptosis. (A) THP-1 cells were treated with 100 μg/ml LTA for indicated times, and mRNA levels of caspases were examined by real-time PCR. (B) Caspase 1 was detected by western blot after LTA treatment. (C) Caspase 3 activity was examined from the cytosolic fraction of LTA-treated THP-1 cells. (D) THP-1 cells were transiently transfected with siRNAs for caspases, and transfectants were treated with 100 μg/ml LTA for 48 h. Cell viability was examined by WST-1 assay. Data are displayed as mean ± SD of three independent experiments. Statistical analysis was conducted with one-way ANOVA and Tukey’s statistical test. * < 0.05; ** < 0.01 compared to 0 h.

Next, the active forms of caspases were examined. The preforms of Caspase 1 increased with 6 h of treatment and peaked at 72 h. Cleaved Caspase 1 was dramatically increased at 6 h and slightly decreased at 72 h, suggesting that Caspase 1-mediated pyroptosis may be involved in aLTA-mediated THP-1 cell death (Fig. 2B). Although gene expression was reduced by aLTA, Caspase 3 activity was significantly increased at 6 h and 24 h of treatment with aLTA-treated THP-1 cell extracts (Fig. 2C). To confirm the role of caspases in aLTA-mediated THP-1 apoptosis, siRNAs were transfected into THP-1 cells and transfectants were treated with aLTA to induce apoptosis. As shown in the previous results, aLTA reduced cell viability in control siRNA-transfected cells. aLTA did not alter the cell viability of transfectants using siCaspase 1 and siCaspase 7. However, the viability of siCaspase 3- transfected cells increased upon exposure to aLTA, suggesting that aLTA-mediated THP-1 apoptosis is induced by Caspase 3 activation (Fig. 2D).

THP-1 apoptosis is mediated by autocrine function of cytokines

Unlike caspase genes, Bcl2 was not altered by aLTA. However, Bcl2 was diminished by LTA in a time-dependent manner (Fig. 4A), suggesting that another regulatory mechanism exists in aLTA-treated conditions. Thus, the role of negative regulators in aLTA-mediated Bcl2 inhibition was examined. siRNA transfected THP-1 cells were treated with 100 μg/ml aLTA for 6 h, and the expression of Bcl2 mRNA was examined by real-time PCR (Fig. 4B). Bcl2 mRNA was reduced by aLTA in control siRNA-transfected THP-1 cells, and the level of Bcl2 was restored in siSOCS-1 RNA-transfected cells. These results suggest that SOCS-1 inhibits the aLTAmediated signaling pathway for Bcl2 expression. The Bcl2 protein level was increased in siSOCS-1 transfected cells (Fig. 4C, lower panel), while it was reduced by aLTA in normal THP-1 cells (Fig. 4C, upper panel). The effect of siRNA on SOCS-1 was examined by western blotting, as shown in the lower panel. Other negative regulators, such as A20 and Abin-1, did not affect Bcl2 expression.

Although TNF-α has been considered a potential anticancer agent, it is not attractive as a systemic drug due to its toxicity and low efficiency to the human body. rhTNF-α showed a reduction in the maximum tolerated dose (MTD) when used in combination with other cytokines such as IL-2 and IFN-γ in phase 1 clinical trial for solid tumor patients. However, this result is considered to have been caused by the redundant toxicity of the cytokine used in the test. Due to toxicity and inefficiencies of testing with various cytokine combinations in the initial trial, no additional secondary clinical trials were conducted [21]. The current study showed that LTA from gram-positive bacteria can induce pro-inflammatory cytokines such as TNF-α and IFN-γ, which induce cell death. Although our data suggest that aLTA could be an efficacious agent for cancer treatment by inducing TNF-α and IFN-γ from immune cells, further study is needed to reduce cytotoxicity against normal cells.

During infection, induces apoptosis in a wide range of target cells as a means of invading tissues and antagonizing host immune defenses [22]. Cell death, such as apoptosis and necrosis, is also used when is released from keratinocytes [23]. produces apoptotic virulence factors, including potent toxins such as α-toxin and enterotoxins and superantigens [22]. In addition to endotoxins and exotoxins, aLTA seems to be able to induce host cell apoptosis. aLTAmediated apoptosis was mediated by Bcl2 inhibition as well as Caspase 3 activation. Bcl2 mRNA production of THP-1 cells was significantly decreased by 3 h of aLTA treatment. Unfortunately, there is no report indicating how aLTA regulates Bcl2 production. In this study, we examined the role of negative regulators on aLTA-mediated Bcl2 regulation. When negative regulators were knocked down using siRNA, aLTA-mediated Bcl2 production was increased by siSOCS-1 RNA. This result suggests that SOCS-1 may regulate Bcl2 production in aLTA-treated THP-1 cells. Negative regulators including A20, Abin-1, CYLD, IRAK-M, SOCS-1, and SOCS-3 inhibit the signaling pathways involved in cytokine production. Among these, SOCS-1 negatively regulates the JAK/STAT pathway [24]. TLR ligands including aLTA induce SOCS-1 production directly through activation of early growth response-1 (EGR-1) and/or indirectly through cytokines, including IL-6 and IFN-β, induced by initial TLR signaling [25, 26]. Fujimoto and Naka proposed inhibitory mechanisms of SOCS-1 on TLR signaling: (i) SOCS-1 binds to Mal/TIRAP and mediates its degradation via a proteasomal pathway; (ii) SOCS-1 binds to IRAK and may modulate its activity; (iii) SOCS-1 binds to the p65 subunit of NF-κB and targets it for proteasomal degradation; (iv) SOCS-1 inhibits JAK2 activated directly after TLR stimulation; and (v) SOCS-1 regulates TLR-mediated response indirectly by inhibiting TLR-induced cytokines such as IFN-β [27]. aLTA induces serial activation of signaling pathways, including those of IRAK, NF-κB, and MAPK, to induce pro-inflammatory cytokines. As a feedback inhibition mechanism, aLTA may induce SOCS-1 to inhibit activated signaling pathways. Conversely, Caspase 1 was significantly increased by aLTA, although it was not involved in aLTA-mediated THP-1 cell apoptosis. This suggests that caspase and Bcl2 gene regulation are differently controlled in THP-1 cells after aLTA stimulation.

In conclusion, we found that host cell apoptosis could be induced by aLTA as well as toxins produced by . Our study demonstrated that aLTA-induced apoptosis requires cytokines such as TNF-α and IFN-γ. aLTA was involved in cell apoptosis by inhibiting Bcl2 through increased expression of SOCS-1. The present study provides useful preliminary data for the mechanism study of host ceall apoptosis using aLTA, a cell wall component of .

The authors have no financial conflicts of interest to declare.