Microbiology and Biotechnology Letters (Microbiol. Biotechnol. Lett.) is published and distributed as a regular quarterly issue on the 28th of March, June, September and December each year. A free access journal, including full-text articles, is available for download free of charge on the journal's website
(http://www.mbl.or.kr).

MBL is published in part with financial support from the Korean Federation of Science and Technology Societies Grant funded by the Korean Government (MEST). 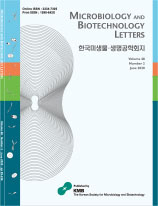